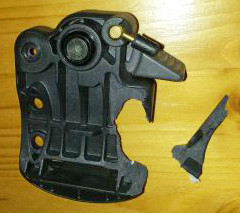 I recently purchased a manfrotto 324rc2 head with a damaged top plate for cheap.

My plan was to repair the head for use with a small (and light) point and shoot camera.  The top plate has mounting holes in two locations which I thought would enable me to just mount the plate in the second set of mounting holes, making for an easy repair. Unfortunately, upon close inspection, the  damage to the plate was more extensive than just the mounting holes. The plate had several little hairline fractures which might result in a catastrophic failure if stressed too much.

I decided to try and epoxy the fragments back on to the plate and at the same time the epoxy would act as reinforcement to the hairline fractures.

To prepare the plate for gluing I roughed up the surface of the plate using a dremel rotary tool. I then proceeded to clean off the parts in ethanol. Once the ethanol had dissipated I taped off the parts I did not want any epoxy on, mixed the epoxy (regular 5 minute 2 part epoxy) and applied it to the plate, taking care not to get epoxy in locations that would interfere with mounting in the second set of holes.

This was the result. 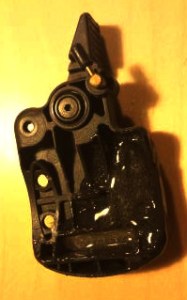 Keep in mind I am going for function over form here.

It appears to be pretty solid, and as this head will never hold anything heavier than a small point and shoot  camera (typically weighing a few hundred grams) it should hold up nicely. On a side note the head looks to be well made.